This post is part one of my plastic-free Mexican food series. A lot of people eat refried beans from a can. Although this is convenient, most cans are lined with an epoxy resin containing bisphenol-A, or BPA. BPA has been found to leach into canned food, especially in more acidic canned foods like tomatoes and fruit. What about BPA-free cans, you ask? Unfortunately, these cans contain toxic chemicals too. I avoid canned food because of the BPA (and other chemicals), but also because I don’t like the taste of it. Canned food isn’t fresh. And finally, canned food is filled with preservatives, artificial flavorings and usually TONS of sodium. So what are you to do when it comes to refried beans? They come in a can! Good news. Homemade refried beans are easy to make, cheap and delicious. Leftovers can be frozen for later. Here are the ingredients you need. 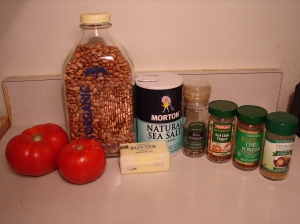 Put the beans in a large bowl and add enough water to cover them by about two inches. Soak overnight (or up to 24 hours). The longer you soak the more digestible they become. Change the water every 12 hours if you soak them longer because they’ll start to smell really terrible if you don’t. I soaked mine for over 36 hours by accident. I soaked them on Monday night, but then I had to work on Tuesday and I couldn’t cook them after I got back cause I had other stuff to do. So I didn’t get around to it until Wednesday.

Drain and rinse the beans. Put them in a large pot and add half a gallon of water. You may need to add more water later. 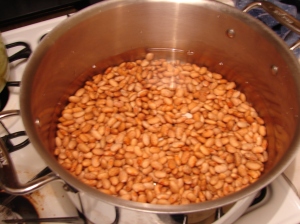 Cook the beans for one to two hours, or until they are very tender and the skins are falling off. Drain and return to the pot. 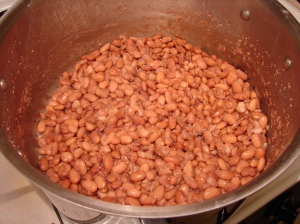 Melt the butter and add it to the beans. Add the chopped tomatoes. Blend with an immersion blender until pretty smooth, but with chunks. I have a metal immersion blender. Using a plastic immersion blender in hot food is probably not a good idea since it causes the chemicals to leach out. That said, you could probably also use a potato masher to do this.