My favorite fish dish is sole meunière. This is a popular French dish where fish is cooked with butter, lemon and parsley. A few weeks ago I decided to make some. So I walked over to the grocery store. At the store I go to they have seafood sustainability ratings for each kind of fish. I was going to get some sole. But the seafood rating said “some concerns with how caught or with health of habitat due to other human impacts”. I thought that was pretty vague, so I asked the fish guy what that actually meant. He said that the sole was trawl caught. According to the Monterey Bay Aquarium website, “bottom trawling can result in high levels of bycatch. Dredging involves dragging a heavy frame with an attached mesh bag along the sea floor to catch animals living on or in the mud or sand; catches include scallops, clams and oysters. Dredging can damage the sea floor by scraping the bottom and also often results in significant bycatch.” So I bought some sustainable tilapia instead. I was disappointed. Tilapia meunière? I didn’t know how good it would be. But I made it, and it was good. Today I made it again so I could share the recipe. So here it is: tilapia meunière (which may or may not be a real thing). Here are the ingredients I used:

(I brought my own container to the fish counter. Unfortunately the fish guy put extra plastic sheets in the container, but at least there wasn’t as much packaging as there would have been had I not brought the container.)

Rinse the fish and pat dry. I use kitchen towels to do this, then wash them in hot to kill any germs. I know that washing in hot takes more energy than cold, but I think that occasionally doing one load of laundry in hot has less of an environmental impact than using paper towels. 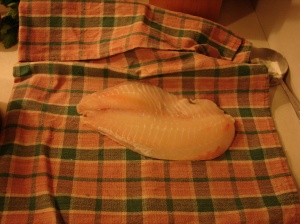 Dredge the fillets in flour. 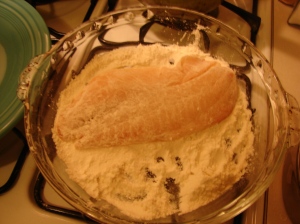 Add two fillets and cook for about three minutes.

Flip. Let cook for three minutes, then pour half of the lemon juice over the fillets. 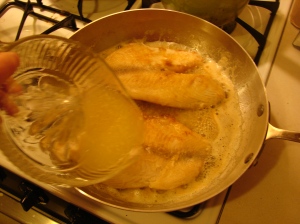 Remove from the pan and sprinkle with parsley and salt to taste.

Melt the rest of the butter and cook the remaining two fillets. Serve. Unfortunately, I don’t have a picture of all four fillets. My family attacked it before I could get the camera. Enjoy!