Quiche is one of my favorite foods. I know, I say that about every recipe I put on here. But it’s always true! The special thing about this quiche is that it has butternut squash for crust instead of pastry. This makes it lighter than traditional quiche and as an added plus, its gluten free. I wanted to put mushrooms in this quiche, but I already have a mushroom spinach quiche recipe on here. So I decided to put bell peppers and leeks in this quiche. Here are the ingredients I used:

Cut the dark green part of the leek. Split lengthwise and slice on a bias into half moons. 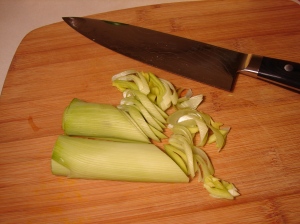 Put the sliced leeks in a colander and rinse well. Washing the leeks after you cut them makes it easier to get out all the grit between the layers.

Next, cut the bell pepper. Run a knife around the top, but don’t cut it off. 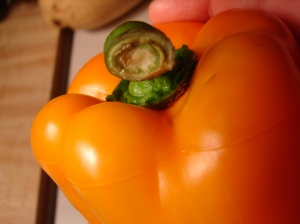 Next, twist off the cap. It will come off with the seeds attached.

Cut the bell pepper into slices. 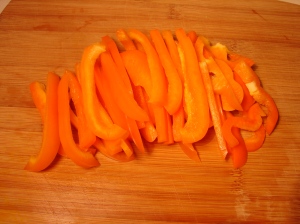 Melt the butter in a skillet. Add the leeks and saute for about three minutes.

Add the bell peppers and saute for about five more minutes. Add salt and pepper to taste. 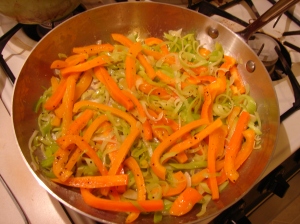 In a bowl, beat eggs with cream.

Grate the cheese and add it to the egg mixture along with the sauteed vegetables.

Oil a pie pan. Peel the squash and cut into 1/8 inch thick slices. Arrange the slices in the shape of a crust. For the slices around the sides of the pan, cut off the bottoms so they will sit straight along the bottom of the pan. Cover any holes with smaller pieces of squash.

Pour in the filling.

The squash will shrink a bit in the oven. Enjoy!