Cranberry sauce and cranberry apple chutney are my favorite Thanksgiving sauces. But I’ve never been able to find cranberries not sold in a plastic bag. It occurred to me that instead of trying to find plastic-free cranberries I should try to make a different kind of chutney with plastic-free ingredients. I came up with this recipe for pear raisin chutney, and it tastes great. This doesn’t mean I’m having a plastic-free Thanksgiving though. I’m still making cranberry sauce. My family would be really angry if we didn’t have it, especially my little sister. I think if I denied her cranberry sauce she would cut my hair off in my sleep! But if you want a totally plastic-free Thanksgiving, this is the recipe for you. Here are the ingredients you need: 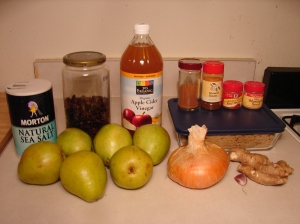 Core and dice the pears, but don’t peel them. 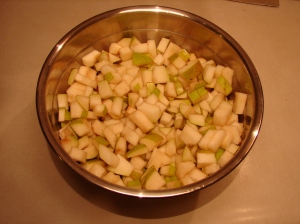 Chop the onion. Mince the garlic and ginger.

Combine brown sugar and apple cider vinegar in a medium pot. Bring to a boil.

Bring to a boil. Reduce heat and simmer for an hour to and hour and a half, or until thick and greatly reduced. Mine looked like this.

I ate some with lentil cauliflower dal for dinner tonight. It would also be good with nutloaf, tourtière and of course Thanksgiving turkey. Enjoy!