Sorry that I haven’t posted in so long. I was on vacation in Wisconsin this week. (Nice state, by the way.) I’m back now, so I’ll be posting more recipes. Here’s one that I came up with recently that was surprisingly delicious. I had heard of black bean brownies, but I didn’t know if they were good or not. I decided I’d try and make some, so I looked up some recipes. I also had some leftover dried coconut from when I made coconut milk that I wanted to incorporate. What I made was more of a cake than a brownie, and it was really, really good. Here are the ingredients I used:

In a food processor or blender, puree beans and milk until smooth. Set aside.

Put butter and chocolate (broken into smaller pieces) in a small pot and melt over low heat. Use a double boiler if you have one. 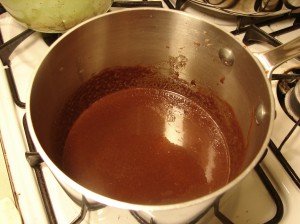 In a large bowl, beat eggs and sugar until light and foamy.

Add a little bit of the egg mixture to a measuring cup. Pour in some of the melted chocolate mixture and whisk with a fork. If you aren’t familiar with it, this process is called tempering. Its an important step because it ensures that when you pour the rest of the hot melted chocolate mixture into the eggs, they don’t cook. This step is even more important when you add eggs to a pot of hot food. One time I had some pudding that one of my friends made. When she added the eggs, she skipped the tempering step and cracked them directly into the pot. I found a whole egg yolk in my pudding! 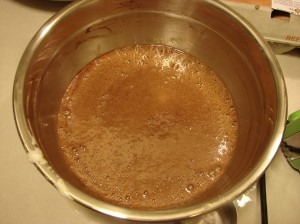 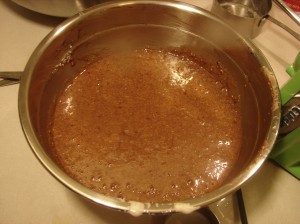 Pour mixture into a greased 8×8 pan. 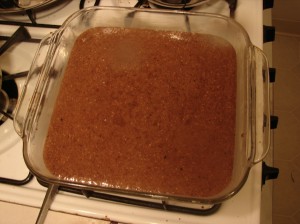 Bake at 350 degrees for 30-40 minutes or until a fork comes out clean. A thin crust will form on top.

Serve with a glass of coconut milk if you like. 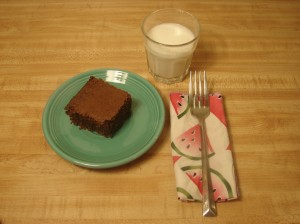 After my mum and I ate half the cake, I covered it with the foil from the chocolate bar instead of using plastic wrap to cover it. I try to reuse aluminum foil as many times as I can. I actually have an old box of plastic wrap in my kitchen drawer that’s been sitting in there since last summer. I have no idea what to do with it. Its PVC-free, but I still don’t really want it touching my food. (What replaces the PVC in PVC-free plastic wrap? I wonder the same thing about plastic that says BPA-free.)

Anyway, enjoy the cake! The recipe will probably work with beans other than black beans too.