I had some leeks in the fridge that I needed to use up, so I decided to make potato leek soup today. This soup is really good, especially with crusty bread. I used half and half in a glass bottle and made my own broth to avoid plastic waste. Here are the ingredients I used: 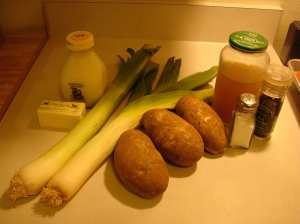 Cut the tough dark green parts off of the leeks and discard (I save these to make more broth later). Cut the white part of the leeks lengthwise and slice into 1/8 inch half moons. Rinse. I find it easier to remove sediment from leeks if I wash them after I cut them.

Peel the potatoes and slice them into 1/8 inch slices. 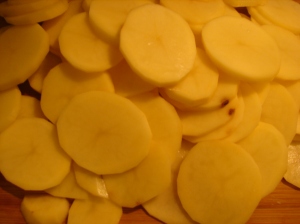 Combine leeks, potatoes and liquid in a large pot. I used an eight quart pot.

Bring to a boil. Reduce heat and simmer for 30-40 minutes, or until vegetables are tender.

Remove from heat. Using an immersion blender, blend until smooth. You can also use a potato masher or a food mill. 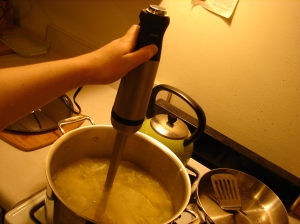 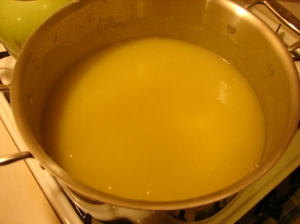 Add butter, half and half, salt and pepper. Heat soup just to boiling point, but don’t boil it.

Enjoy! If you liked this soup post, check out this root vegetable soup.