Store-bought burger buns come in plastic bags and have lots of preservatives and other weird stuff in them. The weirdest thing that burger buns (and most other store-bought breads) have is an additive called L-Cysteine. L-Cysteine is a dough conditioner, and its made from human hair. Sorry, but hair in food is disgusting, no matter what form it takes. Finding hair in your food ruins every meal. One time I was eating spaghetti at a restaurant. (You know, the kind of restaurant that has to pass food inspections and such.) There was a giant hair mixed in with the pasta, almost as thick as the noodles, and it wasn’t mine. The horror. I almost barfed.

So anyway, I found a recipe for veggie burgers. I needed buns to go with them though. I didn’t want to buy any because of the plastic bag and the nasty hair additive, so I decided I would make some. I searched online for a recipe and I found this one. I made it (with a couple modifications) and the results were fantastic. I will never eat store-bought buns again. Here are the ingredients I used: 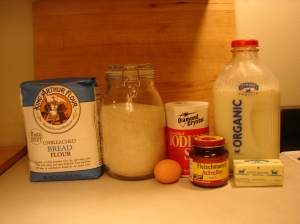 Combine milk, water and butter in a small saucepan.

Heat until butter melts, then cool to about 115 degrees. 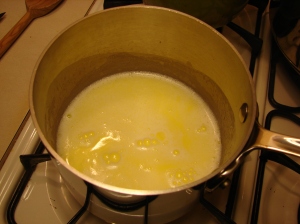 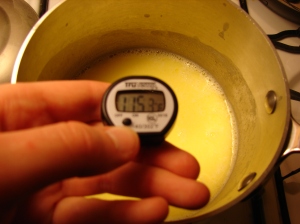 Meanwhile, whisk two cups of the flour, yeast, salt and sugar in a large bowl.

Add remaining flour, 1/2 a cup at a time. Mix well after each addition. Form dough into a ball and turn out onto a floured surface. 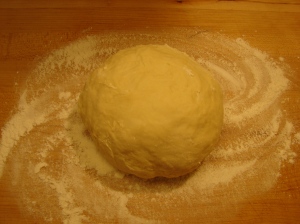 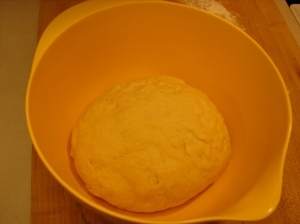 Cover with a towel and put in a warm place for an hour, or until doubled in size. I put mine in the oven since it has a pilot light and its warm in there.

After an hour, your dough should look like this: 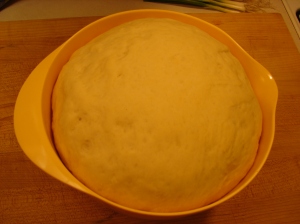 Deflate the dough with your fist. Sorry for the blurriness. I took this picture one handed while my other hand was in the middle of a bowl of bread dough. Now you should be impressed.

Pull the dough in from the sides to deflate it completely.

Turn the dough out onto a floured surface, and split into 12 pieces. Shape each piece into a smooth ball and flatten it slightly. Place on a greased baking sheet. I use Silpats for baking. Silpats are non-stick silicone baking sheets.

Cover each baking sheet with towels and let rise for 30 minutes. I put the baking sheets in the oven to rise. 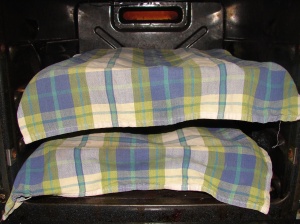 If you like, after the buns have risen and right before they go in the oven, you can brush them with egg and sprinkle with sesame seeds. I did this. Darn. Blurry again. But hey, you can distinguish what it is at least. 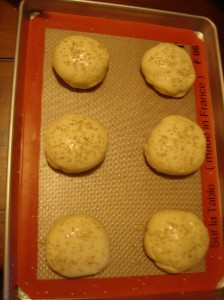 Cut in half and they’re ready to eat with burgers. These were awesome. All the work was definitely worth it. Enjoy! 🙂